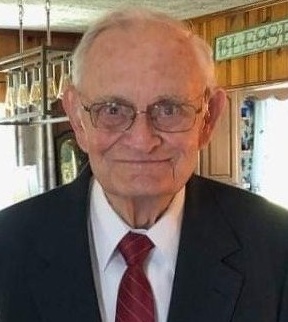 Henry was born in Nora, VA on March 12, 1925 to the late Henry Glen Sr. and Agnes Marie Kendrick Musick. He was preceded in death by his loving wife of seventy two years, Pauline Alberta Johnston Musick; his son: John David Musick; sisters: Helen Owens and Betty Jo Gregory; and brother: James Kent Musick. He was the last surviving member of his immediate family.

He graduated valedictorian at Honaker High School in 1942. His first job after graduating was as a teller at First National Bank of Honaker, VA. His time was shortened there when he was drafted and enlisted in the Army Airforce to serve in WWII. He wanted to be a pilot but was needed more as a tailgunner. He served with the 460  th    Bombardment Group H. On his second mission, his plane crash landed on November 4, 1944 in Yugoslavia and all crew members miraculously survived. A full account of this and other war experiences is written in his manuscript. God performed miracles on November 4 that changed his life forever and impacted the lives of everyone he met. Upon Henry’s return home, he received his AA from Columbia Bible College, SC; his BA from Carson Newman College, TN and later in years his MA in School Administration from East Tennessee State University, TN.

At Columbia Bible College, he met the love of his life, Pauline A. Johnston from St. Louis, MO. They hoped to be foreign missionaries but the Lord had a different plan and brought them home to Russell County to serve in the churches and schools in the local communities. Henry accepted the Lord at Finney Baptist Church where he was later ordained as a pastor and was a member throughout his years. During his forty year ministry, he co-founded New Garden Baptist Church and Ivy Spring Baptist Church where he pastored. His entire life and by the grace of God, he led many people to the Lord. He served in the Russell County Schools for thirty two years as teacher, principal at Givens, Honaker, Lebanon Elementaries and Honaker High Schools, Elementary Supervisor and Assistant Superintendent at the time of his retirement in 1987. During the 70s and 80s in his spare time, he owned an egg company Happy Hens Haven. Upon his retirement, Henry gained a new interest and hobby buying, researching and selling antiques and started Musick Antiques.

The family would like to extend a special thank you to caregivers (both his and Pauline’s) Sheila, Logan, Laura, Ellen, Kim, Amanda, and Lyndsey, the nurses at Legacy who gave him loving care and especially his doctor of many years, Dr. Jennifer Jonkers. The family greatly appreciates the dedication of daughter Rebekah who with her coordination of care for both parents made it possible for them to remain at home. Also to his son Stephen and wife Minne who lovingly tucked him and Pauline safely in bed each night for their last years and for all the other children who spent nights and weekends with their parents.

In lieu of flowers, the family requests that memorial contributions be made to Finney Baptist Church mailing address at 1966 Chestnut Road, Honaker, VA 24260.

To order memorial trees or send flowers to the family in memory of Henry Glen "H.G." Musick, Jr., please visit our flower store.